In the summer of 2015 we took a 4 day camping trip to Glacier National Park. Of all the days spent there, 4th was the most eventful.

It started with the morning at magnificent Two Medicine Lake. Later we drove across the mountainous going-to-the-sun-road, making several stops along the way. We had an amazing lunch at a local café and a delicious Huckleberry Ice cream as well. By the end of the day, we were almost exhausted, but I had one last item to check off my list. Little did I know, it was to be one of the most memorable nights of our trip.

Since Glacier is far away from the light pollution, on the clear nights you can spot the Milky Way Galaxy. And that’s exactly what I wanted to do!

I woke up around midnight to setup my camera outside our tent. As I stepped out, I saw the view I’ve never seen before. The sky was packed with gazillion stars, the sheer number almost made me dizzy! I stood in stunned silence for few minutes , not knowing what to do.

Milky Way was clearly visible and after few minutes I started taking pictures. It was so silent, the echoing sound of crickets felt louder every minute. Every time my camera shutter clicked, I felt uneasy, as if I was disturbing a great symphony. I think words do not do justice, when I try to describe the night. 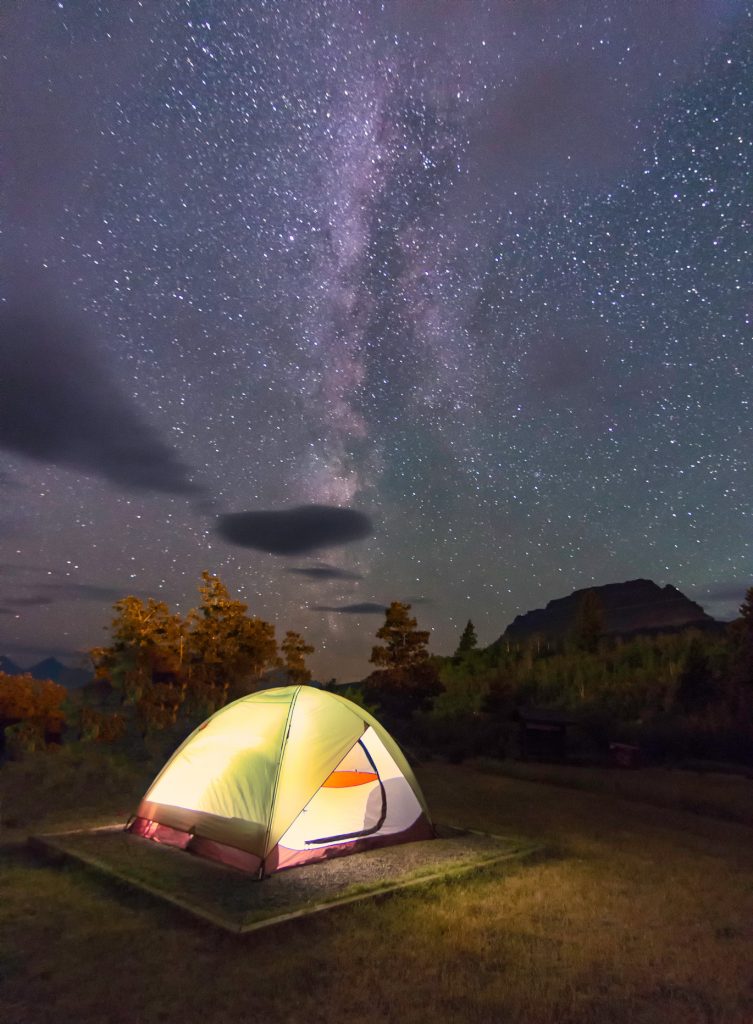 The night of the million stars.Milky way shines bright at glacier national park. Although the shot is far from perfect, this night was memorable.

While I was busy taking pictures, I heard a grunt in the bush. I instinctively turned my torch in the direction. A black bear was peacefully munching on berries right next to our tent. I was so busy marveling at the sky the whole time, I did not notice it at all!

I obviously called it a night and went inside. Somewhat shivering but excited at the same time.

Later, the bear made couple of rounds around the campfire. I heard scratching and biting noises, as it played with the wood pieces. Later the bear decided to investigate around our tent. I could see its shadow moving really close and could hear its raspy breath. This is when I was certainly scared. I wasn’t really sure what I’d do if the bear became too aggressive. Funnily enough, it now reminds me of a typical thriller scene from the Hitchcock movie.

Like I have always believed, animals are gentle & mostly just curious. If you respect their habitat and home, they reciprocate. After few explorations, the bear went on its way.  It’s a good thing, we didn’t have any food in our tent.

Madhura was tired and sleeping while all the drama happened, we saw the footprints next morning.That was our last day in glacier and the one that stays fresh in our memories.

Have you had any wild encounter? How did you feel afterwards?