When we travel, we often come across places that leave a long-lasting impression.  Whether you are a well-traveled person or not, few places always hold a special place in your heart.  These are the places which pop up in your mind first when you think about your travel experiences. They are the most special of all. For me, New Zealand tops that list. It is the best trip I’ve ever taken to date. And yet another love at first sight was the Pacific Northwest in the United States.

Three years ago, I visited Oregon and it left me wanting for more. I was looking for another chance to visit, and got it last month. I left my job for another and had four weeks in between. It was time for a trip. This time just for photography.

With my daughter’s many health issues, we are hard pressed with constant routine of hospitalizations, medication rounds etc. My wife wanted me to use this break to take a solo trip and do what I like the most – take photos.  This trip was meant to be a respite, a refreshment and what a trip it was! I came back with refreshed mind, tired body and a lot of pictures!

When planning this trip, I decided to keep it flexible. Pacific Northwest has finicky weather. Rain and fog are usually not great for most types of photography and they can come without notice here. I booked hotel rooms in a couple of places, keeping in mind that I may have to cancel at the last minute. If it were to be rainy and foggy, my plan was to head to the woodlands and shoot some waterfalls, otherwise I was going to stick to the coast.  Thankfully, I hit the jackpot. The weather was fabulous!

I landed in Portland, rented a car and drove straight to Cannon Beach, famous for its haystack shaped rock. You probably have seen numerous pictures of this place already, it still doesn’t make this beach any less special when you visit it.  Separated from the mainland as a result of erosion, this haystack rock adorns the beach and is a magnet for photographers.

Since the best light for landscape photos is around sunrise and sunset, I had planned to be at most of my photo locations at those times. I was going to use daytime to drive from one place to the next or head into the forests for hikes and waterfalls. Although I misjudged some distances and ended up canceling a few plans, being flexible paid off in the end.

Being cognizant of weather and other conditions is also most important when planning for photography. Unfortunately, I learned this the hard way!

On my second day at Cannon Beach, I wanted a specific composition at sunrise. Since I had taken few shots from the north the day before, I wanted to try a few from the south and that was a mistake.  The real magical light happens only for few minutes before/after sunrise and if you miss this window you lose the picture. Since I was hard set on composition, I was facing the wrong way when brilliant clouds created a magical scene behind me.

I could have taken the picture of the sky but there was nothing else behind me. When I realized this, I ran hard to the north side of the rock, but the light vanished before I could reach anywhere near there. Before I setup my camera, I had an inkling that the sky was going to better on the other side. If only I had listened to what the nature was saying, instead of being stubborn as an oak. So yes, listen to mother nature. Go where the shot is, not where you want to be. I still got some pictures and here are a few of them.. 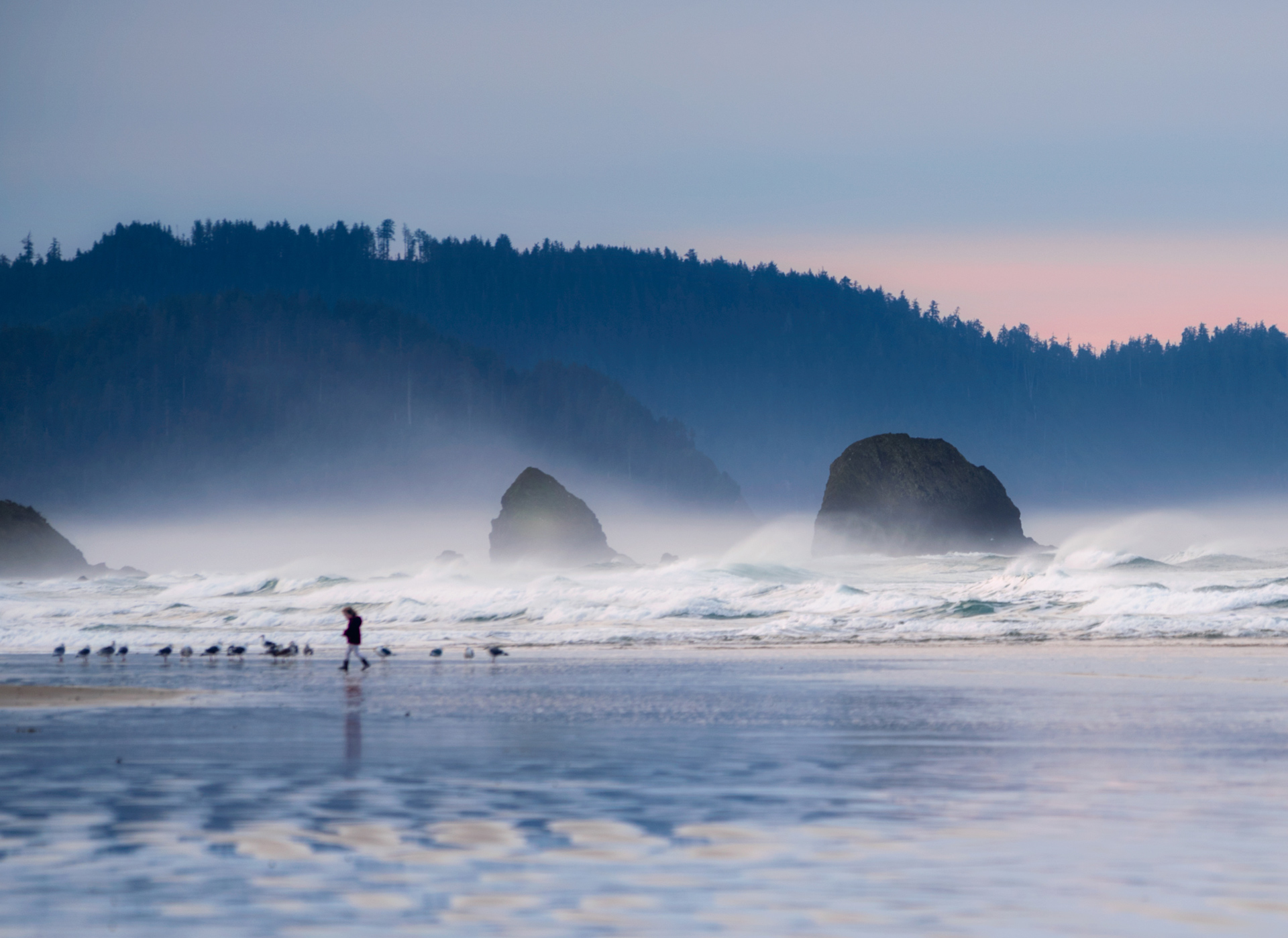 A walk in the mist 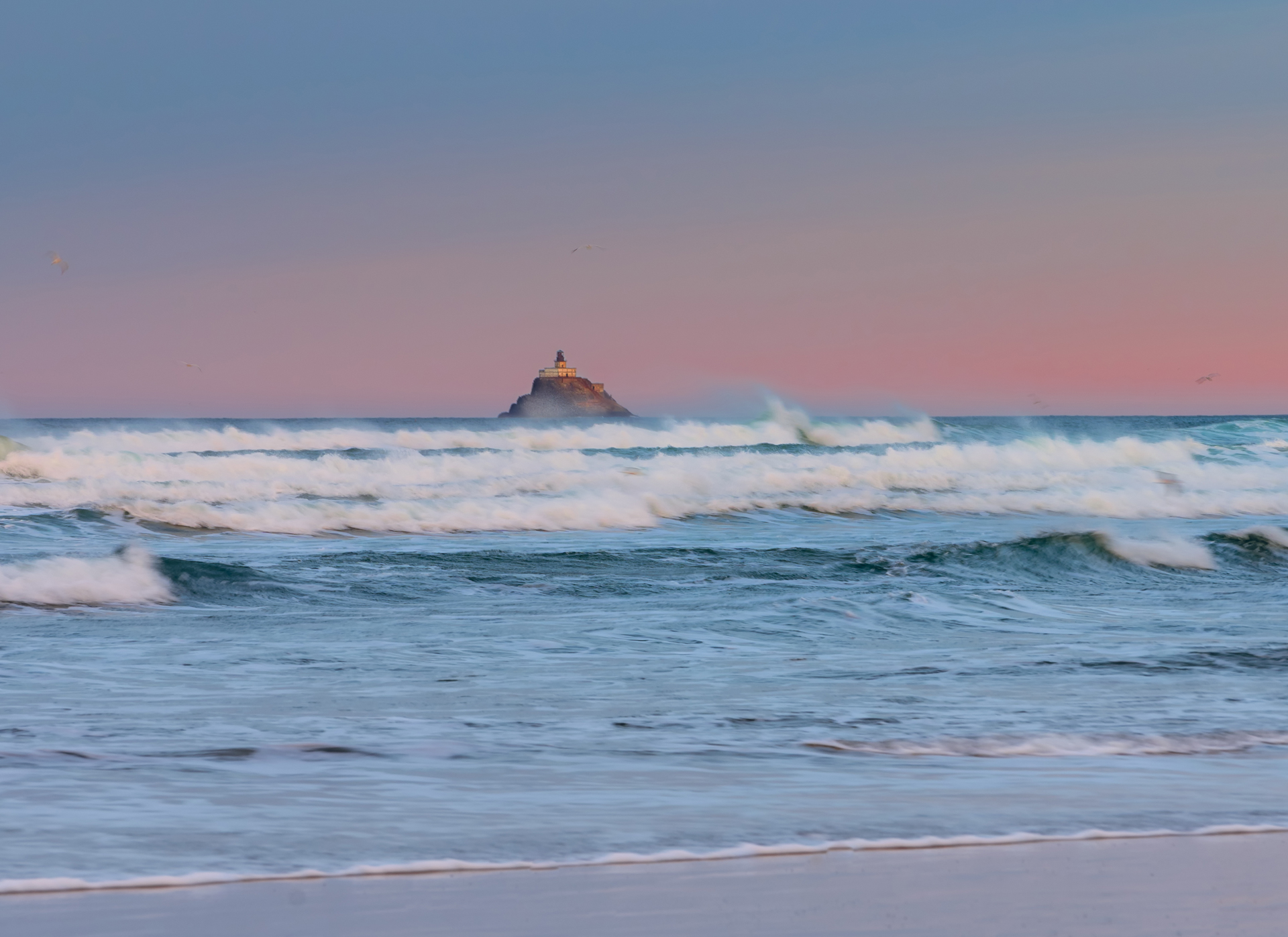 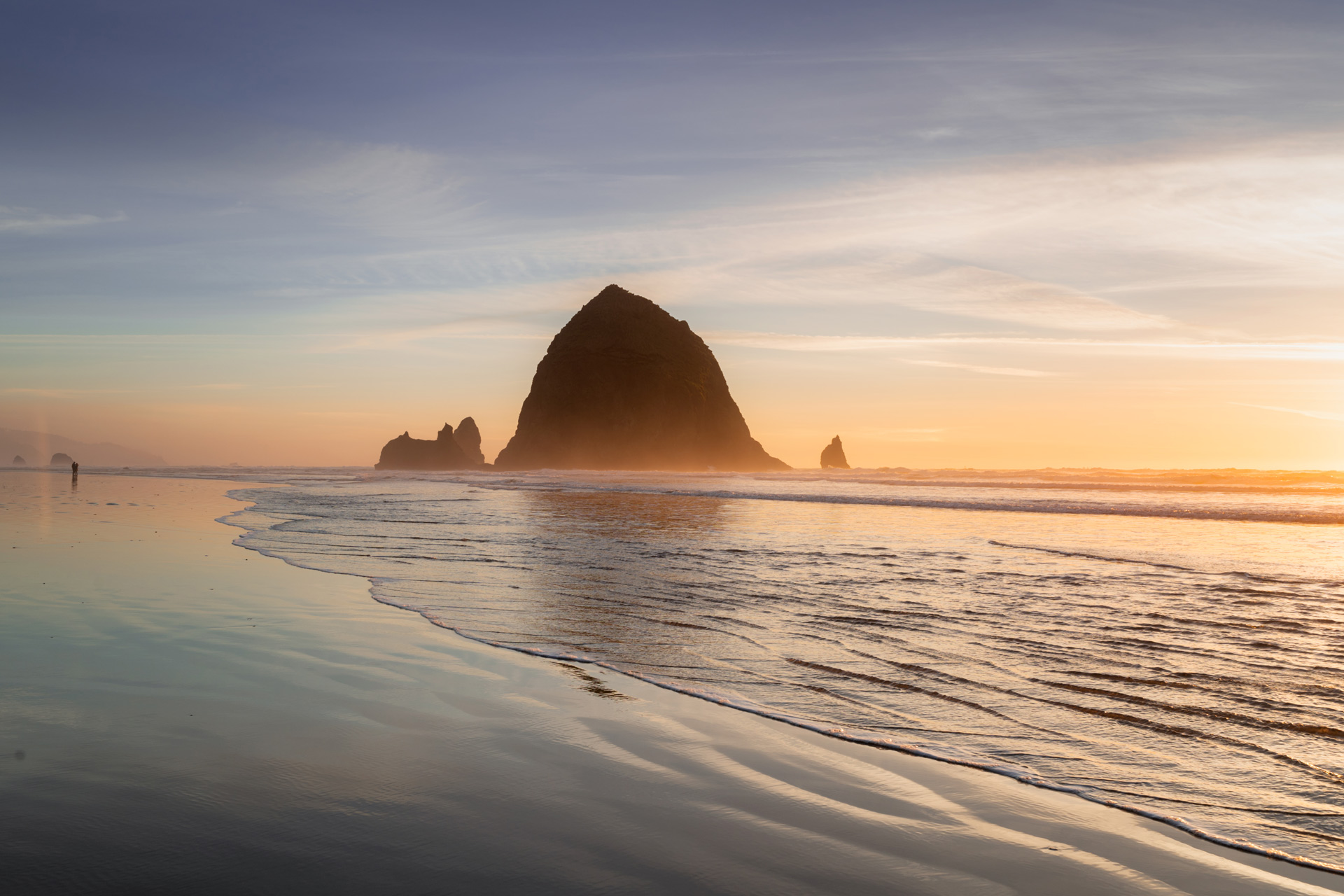 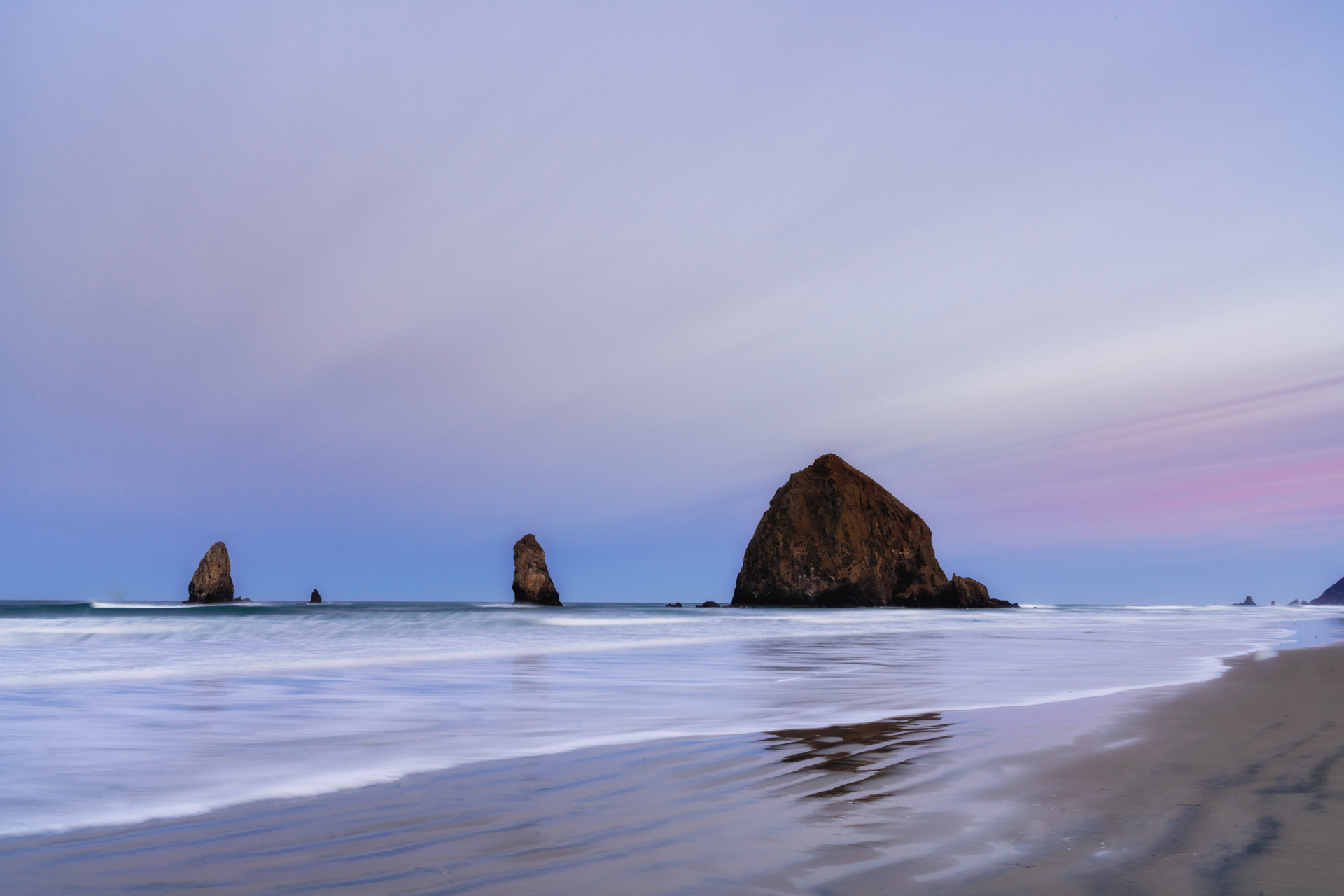 I also met fellow photographer at Cannon Beach, check out her feed on instagram @rgoldphotos, she has a fabulous feed. 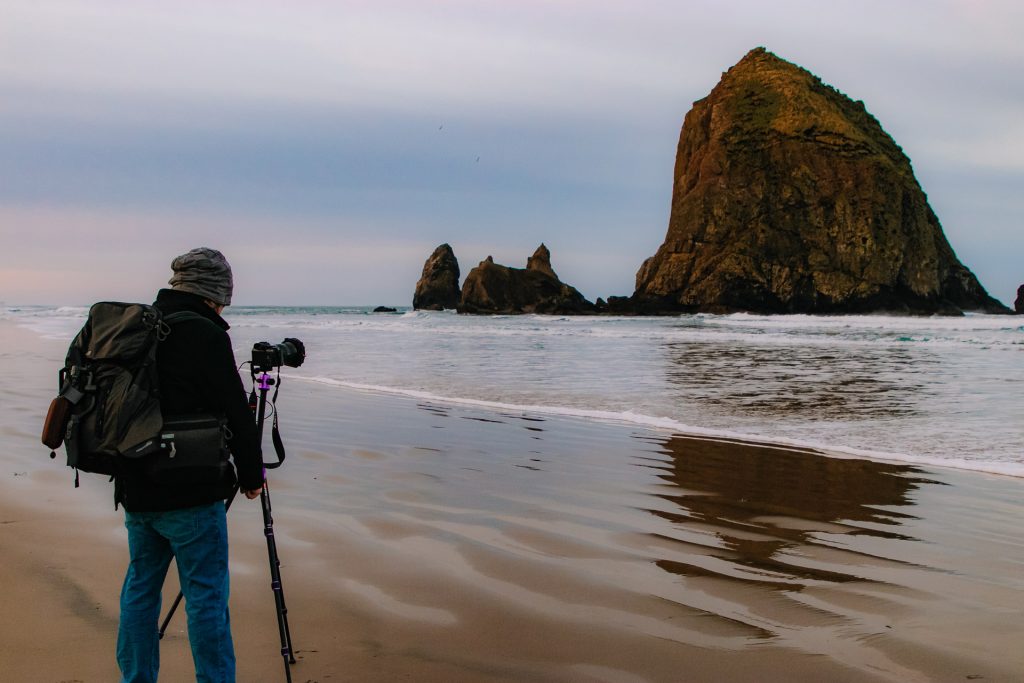 Later that night, I wandered on the beach close to midnight. I was the only one there. It was a cold freezing night and being out in the open, it was very windy, too. Some campfires were still burning, so I sat next to one of them. I relaxed and lied down on my back, and there it was! Milky way was shining bright! I sat right up, set up my camera and took some shots, here is the one I like the best..

For the next hour or so, I was on beach all alone, listening to the waves crashing by and looking at millions of stars up above laying by the warmth of campfire. Meditation doesn’t get better than this. Plus, afterwards I had hot clam chowder in a pub nearby. Nothing like a hot meal after being in a freezing cold for a while, right?

In the next leg of my journey, I drove south to yet another beach town. I shot a lighthouse, sand dunes, magnificent star trails and many waterfalls. Stay tuned for the next blog.. 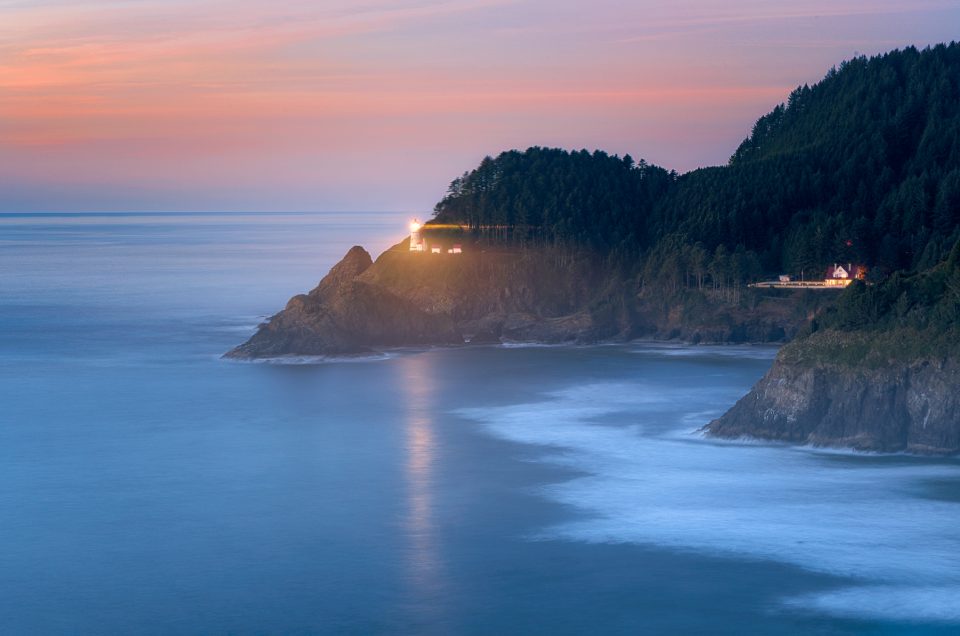 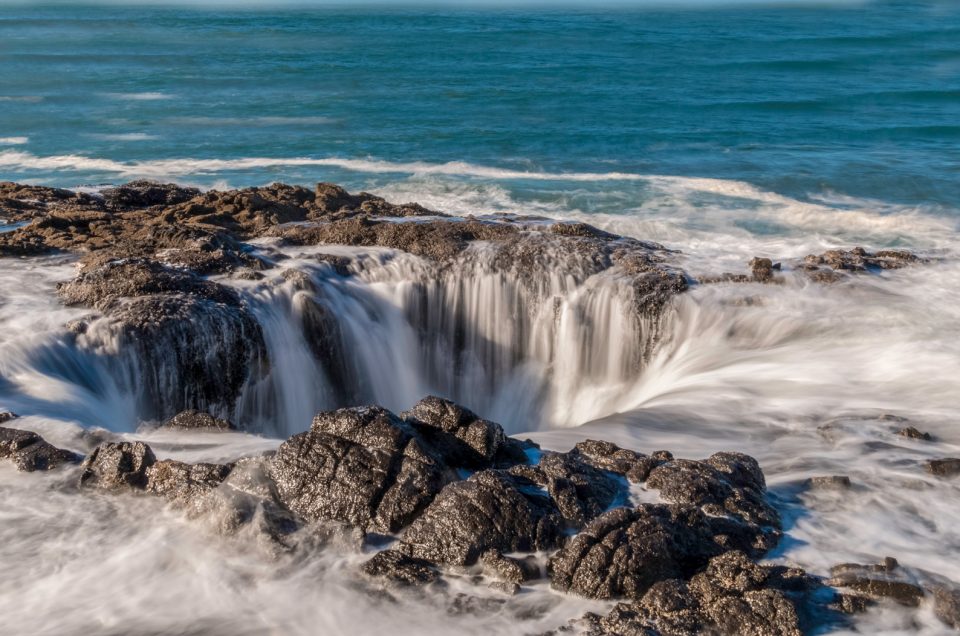 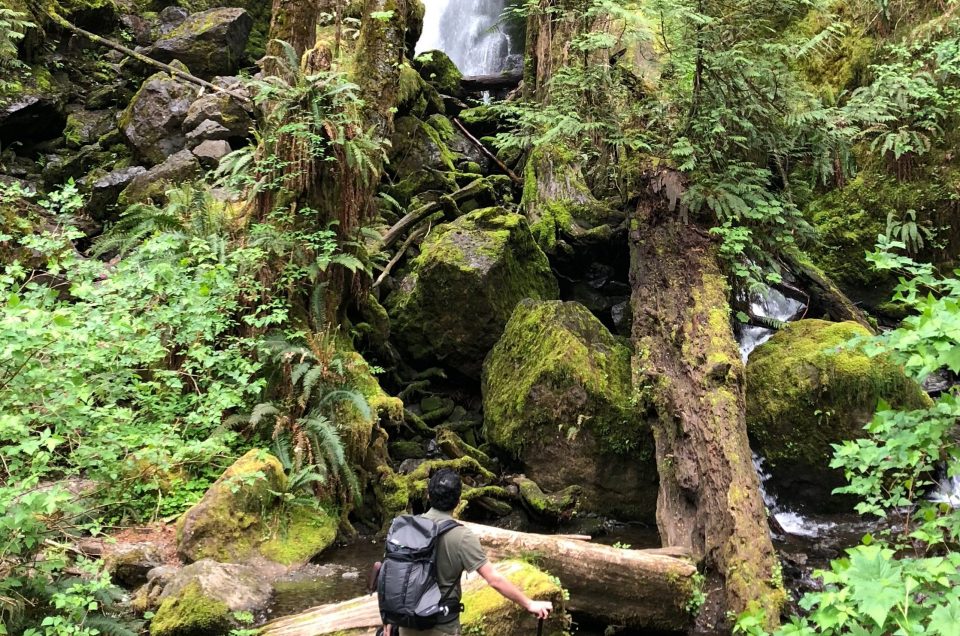